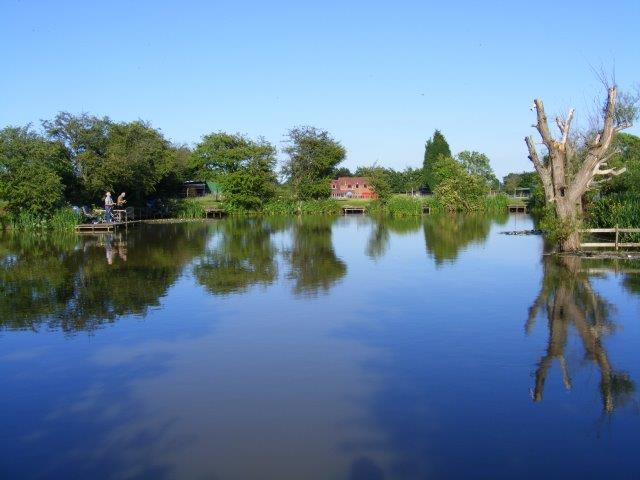 Attractive 300-year-old former clay pit fishery with loads of features and many pegs suitable for disabled anglers. Carp to just under 30lbs with plenty of silver fish. 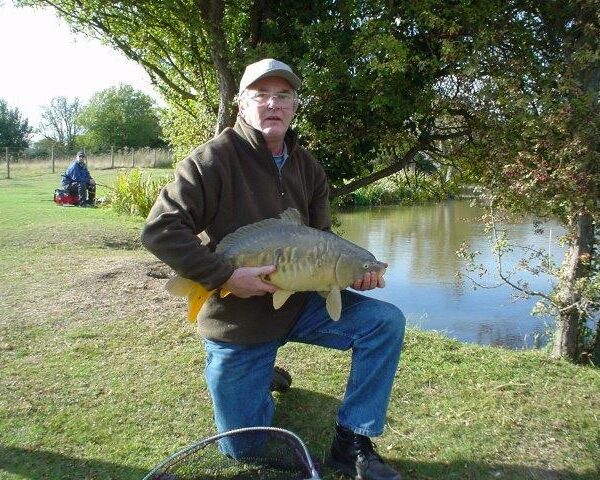 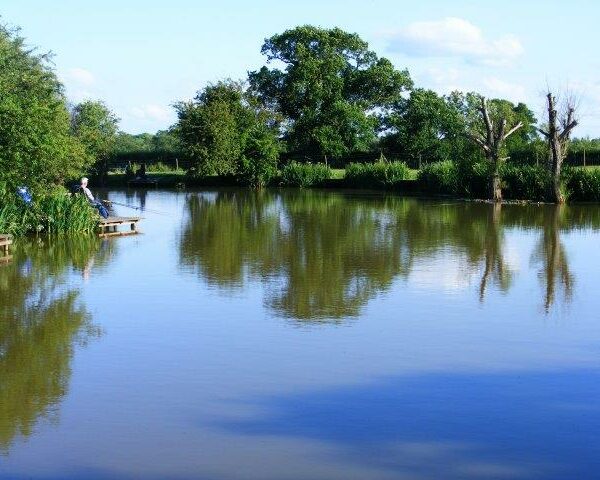 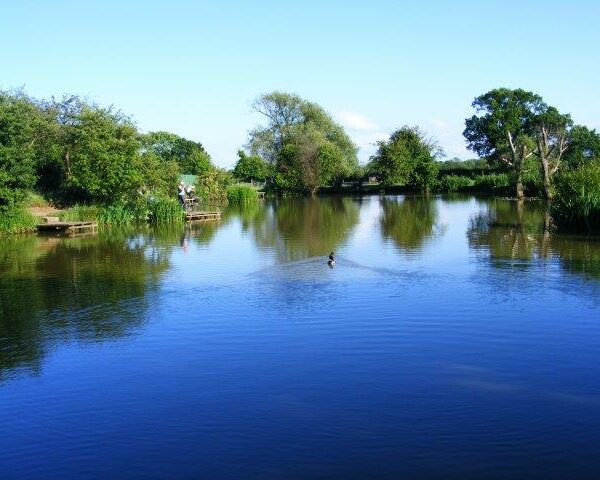 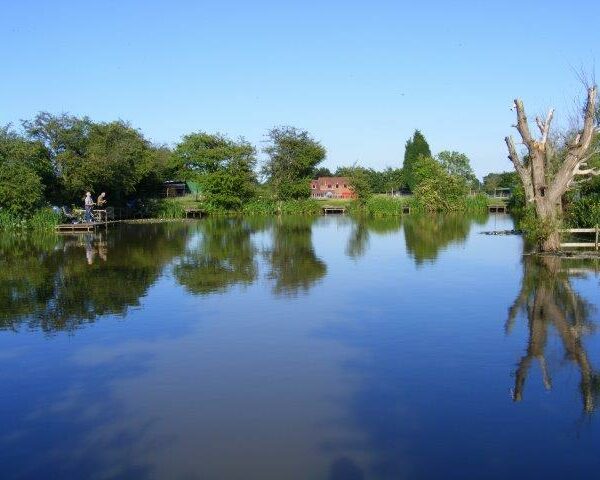 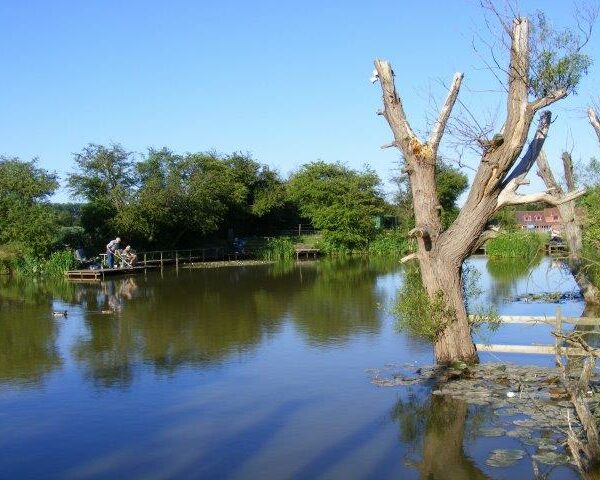 Pool House Farm, near the world famous Belfry Golf Club between Coleshill and Tamworth to the north of Birmingham, bears out the saying that size isn’t everything. Despite covering just an acre, Pool House Farm is a very attractive fishery that offers a variety of pegs and swims. All fishing is from purpose-made landing stages and all pegs have a feature to fish to, whether it be a lush bed of water lilies or weeded margin.

300-year-old pit with an interesting history

A 300-year-old former clay pit about three minutes drive from Junction 9 of the M42 motorway, it was dug to provide building material for nearby Middleton village about a mile away and was originally two separate pools with a bank which ran across from what is now Peg 3 to Peg 15. About 30 years ago the outlet of the pool was filled in. This raised the water levels and resulted in the two pools merging into one, although the former embankment which divided the two waters can still be found running across the pool about two-and-a-half feet under the surface – a favourite haunt for carp in warmer weather.

Current owner Cedric Heys said that when he took over the pool 30 years ago it was unfishable, having been allowed to go stagnant, overgrown and covered in duckweed. All around the edges were mounds of hardcore, concrete blocks and iron bars which were going to be used to fill in the pool. Instead of filling it in, Cedric decided to reinstate the pool and develop it as a fishery, so he set about landscaping the surrounding area, burying the hardcore, concrete blocks and iron bars and grassing over the surface to make it as it is today.

He then set about making it possible to walk all the way round the pool, creating pathways of motorway planings around the top end and constructing a wooden walkway round part of the pool which would have otherwise been inaccessible. Much of the work was done by hand using spade and wheelbarrow.

The result is a delightful pool that holds some 22 anglers on well-spaced pegs. Although the left hand bank as you approach the water from the nearby car park has well maintained grassy banks and reed lined fringes, much of the remainder of the pool is backed by trees and mature shrubs. All pegs are easy to fish from and most are suitable for disabled anglers if they visit the pool with someone else.

Because it is only a small water, Pool House Farm is closed throughout November, December, January and February and re-opens at the beginning of March. This gives the fish a rest during winter and prevents them from becoming stressed by over fishing.

Although there are no facilities to speak of, there is an ample sized car park about 25 yards from the pool. Anglers should obtain a ticket from the farmhouse before setting up to fish. With 22 well-spaced pegs the fishery is available for match fishing. Prices vary depending on the start time with a maximum of five hours per match. Matches can start at 7.00am. All fish can be retained during matches but every angler must have two keepnets. Please telephone for prices.

Between three and four feet deep around the margins, Pool House Farm is about five feet deep to the right hand side of the causeway which runs across the pool from Peg 3 to Peg 15 and about six feet deep in the left hand section furthest from the car park. Because it is relatively shallow it is easy to fish with the waggler or pole, although a fair proportion of anglers also like to leger with swim feeder, use modern carp techniques or simply attach a straight-through leger weight.

Mirror and Common Carp amongst other fish

The biggest fish in the water are the common and mirror carp, both species of which run to a good 26lbs with plenty of mid-sized doubles regularly taken. There are also some good tench to a rod-bending 7lbs and, perhaps most impressive of all, an estimated 100 or more hard-fighting but difficult to catch perch which were introduced at about 1lb some 10 years ago and which now top the 4lb mark and provide exciting sport, particularly in the colder months.

For those who like gudgeon, there are some stonkers with fish to seven inches long… a size which few anglers have ever seen – never mind caught! The remainder of the fish are made up of roach and rudd to 1lb 8oz which are most regularly taken on waggler or pole fished worm; crucian carp to just over 3lbs; and bream and chub to a similar size, although the chub are said to be difficult to catch because other fish normally beat them to the bait.

Pool House Farm is noted locally for its good head of crucians which are said to fight well and which attract their own following of regulars. If targeting the crucians, the most popular technique is to waggler or pole fish a quarter-inch cube of luncheon meat over a small amount of sweetcorn, feeding three or four kernels every third cast. The most popular hook size is either a 16 or 18s tied to a maximum of 0.15 diameter or 3lbs breaking strain line. Because the pool is only small, there are no particular hot spots for catching the crucians.

Fishing for the carp

If going for the commons and mirrors, cubes of Spam, yellow sweetcorn, maggots, casters and worm all work well, although anglers should note that they should not use hemp, tares, nut baits or dog and cat meat. They are also not allowed to use bolt rigs, maggot clips or paste springs. When visiting Pool House Farm, casters, corn, maggots and worm are all great all-round baits for catching all species.

Pool House Farm is also an ideal venue for fishing floating baits, particularly in summer when the water is warmer and the carp cruise near the surface. Fishing the margins or near to the lily pads is also generally another good way of catching fish.

When fishing for the tench and bream, luncheon meat, sweetcorn, worm, maggots and casters are again good all-round baits when fished hard on the bottom with about four inches between the hook and the last shot.

All in all, Pool House Farm is a delightful venue which, although it is aimed primarily at pleasure anglers, can cater for matches of up to 22 anglers. However, because it is only small, anglers planning to fish at the weekend are advised to ring in advance to check the venue has not been booked for a match.

2022 Opening Times – Beginning of March to beginning of November: 7.00am until dusk.  Anglers are allowed to fish a maximum of two rods. Juniors under 16 must be accompanied by an angling adult. Please obtain your permit from the farmhouse before setting up.

Anglers should not use barbed, crushed or crimped hooks and although they can use keepnets they should not retain common or mirror carp.

Pool House Farm can be found just off the main A4091 Coleshill to Tamworth road just a short distance from Junction 9 of the M42 motorway, Junction T2 of the M6 Toll or Junction 4a of the M6.
On leaving the motorway, follow the signs for Lichfield and Tamworth and at the Belfry roundabout take the A4091 to Tamworth.
After a mile on this road take the first turn to the left and the entrance to Pool House Farm fishery and the car park is about 100 yards along here on the right.
Don't forget to obtain your ticket from the farmhouse, which is immediately on the right as you turn into Brick Kiln Lane, before starting to fish.
Get directions on Google Maps

Staffordshire’s Pool House Farm fishery at Middleton near Tamworth reopens for fishing on March 1 following its traditional winter shut down.

If you like the look of Pool House Farm Fishery in Staffordshire, then you may also like some of our other fishing lakes in Staffordshire including, Pipehill Fisheries, Baden Hall Fishery, Blake Hall, Chorley Springs Fishery and Hamstall Pleasure Fishery.