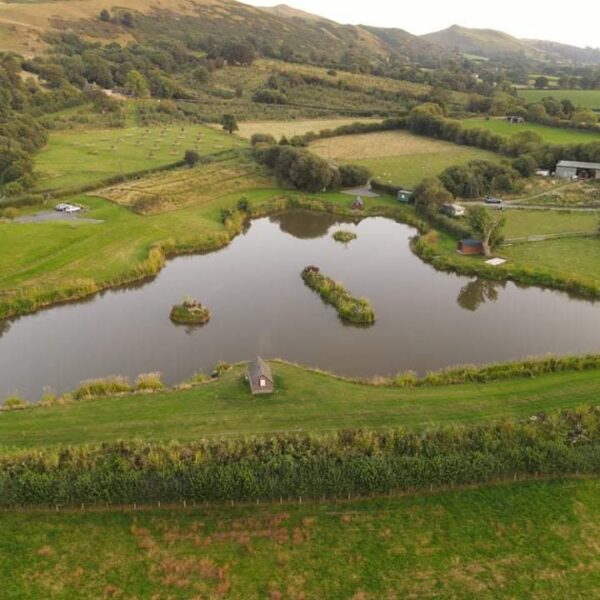 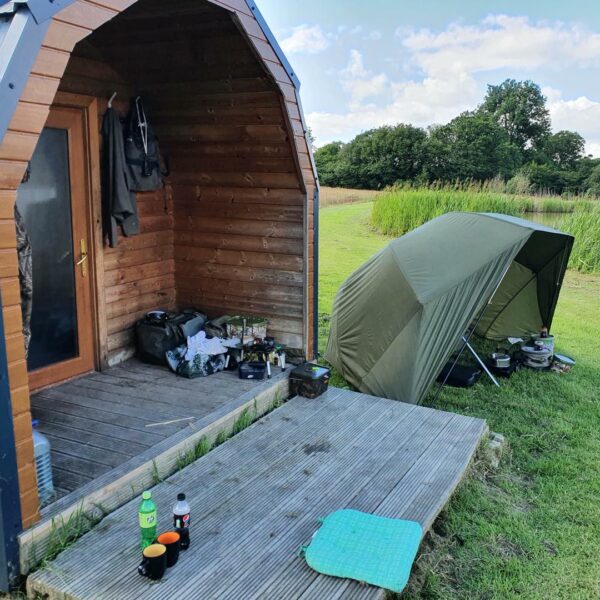 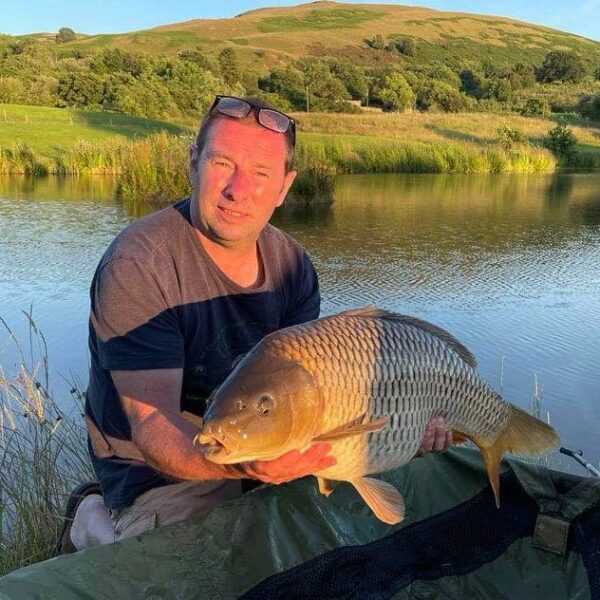 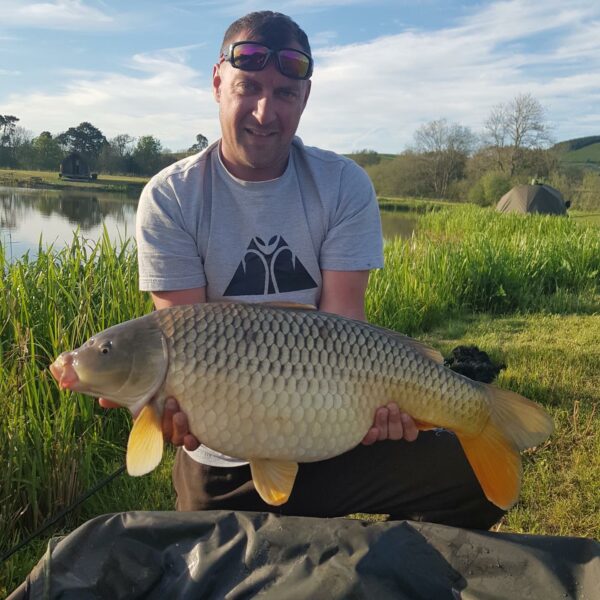 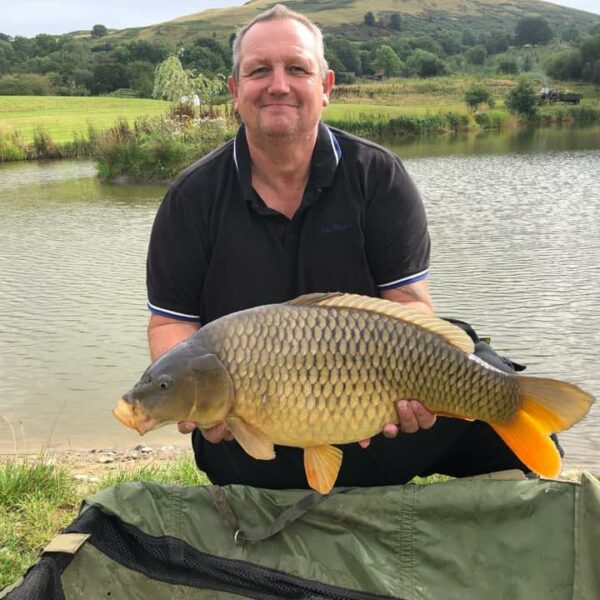 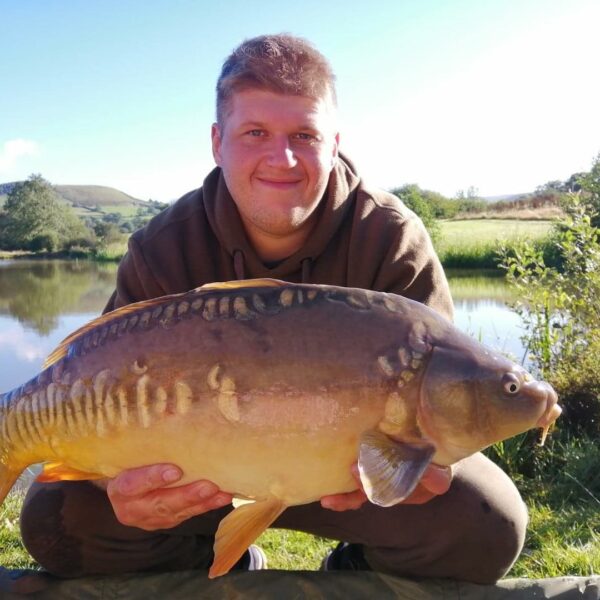 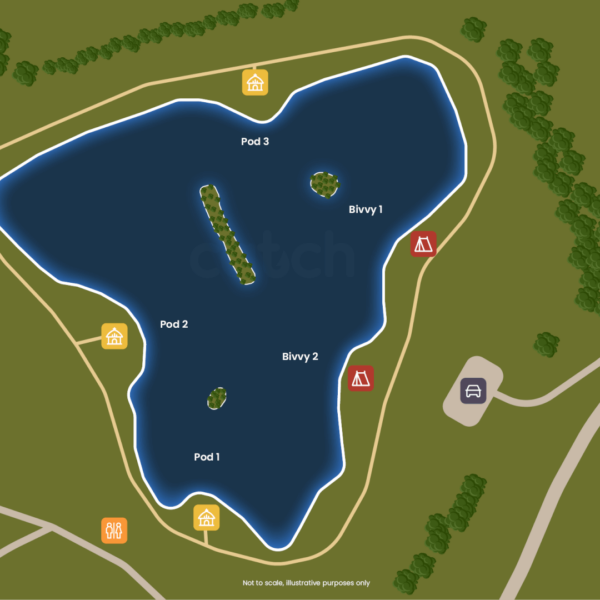 To be found in stunningly beautiful and remote surroundings just off the A44 near Llandrindod Wells, Spring Rock Fishery is a two-and-a-half acre clay bottomed carp fishery built by carp anglers. If you are looking for an attractive water in the middle of remote Welsh countryside where angler numbers are restricted to a maximum of six at any one time, Spring Rock fits the bill. There are three lakeside log pods and two regular bivvy swims which gives everyone plenty of room and their own section of water.

Modelled on one of the Celtic Lakes fishery waters and available for minimum bookings of 24-hours, the fishery opened for angling early in 2008 and has matured nicely since then. The lake was drained and remodelled in 2018/2019 to remove the underwater features and excessively deep areas to produce a smooth and even bottom two metres deep over much of the lake. After refilling it was restocked with 70 of the original fish between 14lbs and 30lbs to give a mix of commons and mirrors together with a few of the larger koi and about 20 of the larger crucian carp to 2lbs.

Although there are some 10 pegs around the lake only half a dozen anglers are permitted to fish the water at any one time.

Because Spring Rock is quite remote there are few facilities for anglers with the exception of three spacious new lakeside log pods, a car park and modern and clean toilets and showers. The three log pods can sleep two people comfortably and come equipped with a TV, fridge and heater and offer more luxury than a regular bivvy while still retaining a natural feel.  The fishery’s remote location means that anglers looking to stay several days should go well equipped with tackle and everything they need for food and cooking, although there there is a petrol station with shop and cafe in nearby Crossgates and plenty of shops, takeaways and a small tackle shop in Llandrindod Wells.

To ensure bio security is maintained, landing nets, cradles and slings are provided for all anglers. Pellets which are used to feed the carp are available for purchase on site at £2.00 per kilogram.

Spring Rock Lake offers plenty of bankside cover and has three central islands which give anglers features to fish to. Depths range from just a few feet in parts of the margins to between five and seven feet further out.

Although there are about 15 natural grass bank pegs around the lake, visitor numbers are restricted to six at any one time to prevent anglers encroaching into neighbouring swims or over casting someone else’s line.

Popular pegs are those along the entrance bank, along the left hand side as you approach the water and along the far bank, all of which give good access to the islands and the channels between them. The bay to the right as you come onto the fishery is shallow, although it often produces good results particularly in warmer weather to anglers presenting a floating bait of dog biscuits, bread of floating pellets.

The water around the majority of the margins is quite deep at between six and seven feet off the entrance banks to eight feet along the left hand bank and the bank opposite the entrance. The bottom then shallows up to about six feet in the main body of the lake and to about four feet in the channels between the islands.

The bay to the right as you come onto Spring Rock is the shallowest at just three to four feet deep, but in summer becomes quite heavily weeded. Despite the weed, this can often yield decent bags of crucian carp for float anglers and in warmer weather is as good as anywhere on the lake for taking commons and mirrors off the top.

Anglers going after the commons and mirrors fish both modern and traditional carping techniques, fishing either in open water or towards the islands and the channels in between them. However, hooked fish need to be steered towards open water to prevent them bolting for sanctuary through the channels and going behind the islands where they are almost impossible to get out.

Another feature of Spring Rock is that whilst boilies are a popular bait it is essential that they are good quality or they will simply be ignored. Ten to 15mm Mainline, Cell, Nutrabaits and Trigger all produce good results with spicy baits appealing to the fish. The fish also take readily on 6mm, 8mm or 10mm light coloured carp pellets.

Anglers should note that halibut pellets and trout pellets are not allowed and that only barbless or micro-barb hooks can be used, with most anglers fishing a Size 8 or 10 to a 12lb line and running leads.

Spring Rock is regarded by some anglers as a challenging water with the fish reacting best to a stealthy ‘one bite at a time’ approach: a single solid bag filled with pellets and cast tight to one of the islands often produces but anglers should not ignore the margins – the Spring Rock carp are often taken down the inside.

Spring Rock prices are for a minimum stay of 24-hours. Because only six anglers can fish at any one time it is advisable to book in advance. Whole lake hire is available with or without pods for individuals or groups of up to six anglers.

Spring Rock Fishery is just a short drive and well signed off the main A44 Worcester to Aberystwyth road
If traveling on the M5 north or south, leave the motorway at Junction 7 and follow the signs for Hereford and the A44, passing over about six roundabouts until you see the sign for Bromyard A44
Stay on the A44 all the way past Bromyard travelling through Leominster and then across country towards Llandrindod Wells
After passing through Llandegley take the first lane to the left after passing the Bulk Household Waste Centre on the left. You will see a banner for the fishery on this junction
The entrance to the fishery is about a quarter of a mile down this narrow lane on the right
Get directions on Google Maps